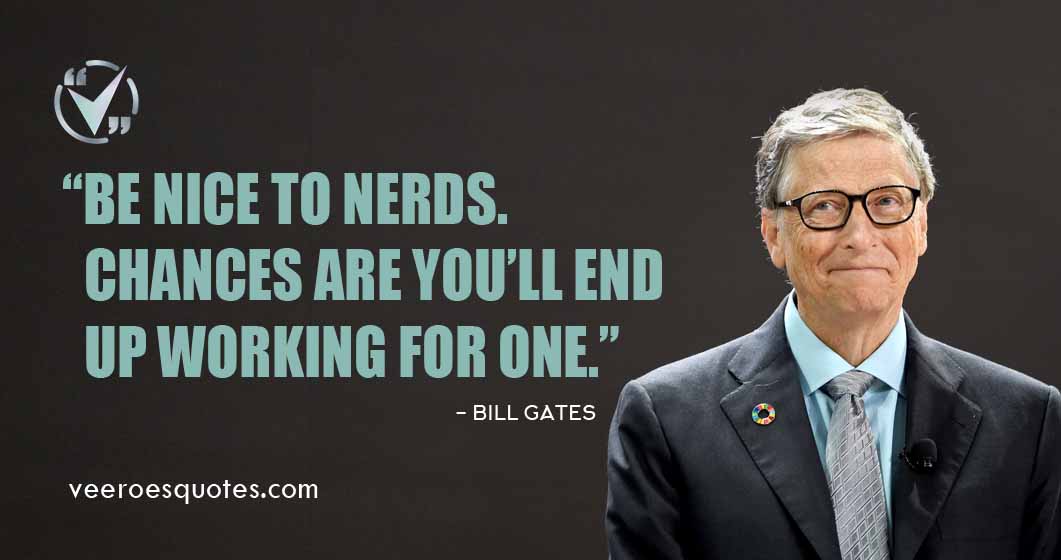 “Be nice to nerds. Chances are you’ll end up working for one.”

Most of the people know Bill Gates as the founder of Microsoft Corporation, a leading software company in the world. He was one of the richest men in the world. He maintained that position for more than 12 years. At one time his wealth had crossed the $100 Billion mark.

However, Bill Gate achievements and legacy goes beyond this mere title of “The Richest Man.” He prefers to define himself as a technologist, philanthropist and business leader. His entrepreneurial dreams made him drop Harvard to start Microsoft along with his childhood friend Paul Allen, and the rest is history. Currently, he along with his wife Melinda Gates co-chairs the charity foundation Bill and Melinda Gates Foundation.

Bill Gates is known for his quiet, pragmatic nature and massive donations to charity. It was his relentless perseverance which made Microsoft a global brand. There are many things which one can learn from him. You can find many best-selling Bill Gates biography online to learn more about him.

Below are the Top 30 Bill Gates Quotes and advice for young minds. Bill Gates Quotes for students are like a daily dose of motivation and inspiration. We hope that these quotes motivate you to be successful in life.

“Success is a lousy teacher. It seduces smart people into thinking they can’t lose.”

Gates asserts that success is nothing but illusions of the mind. If someone is going through a smooth patch in their lives, they start calling it a success. However, life is full of ups and down and no one can predict when tables turn. Pleasant times are not always the best teachers, and we learn more about life in our tough periods. These kind of funny motivational quotes by Bill gates are genuinely inspiring

“Don’t compare yourself with anyone in this world… if you do so, you are insulting yourself.”

Never in life, one should compare their experiences with others as being successful is subjective. Others definition must not define your life and achievements. Inspirational quotes by Bill Gates inspires to find the correct perspective about life.

“Your most unhappy customers are your greatest source of learning.”

A bunch of unhappy customers educates you about the room for improvement in your product or services. So, if you are someone with entrepreneurial dreams, then you must always consider unhappy customers as assets, not nuisance. Business lessons by Bill Gates are a great learning experience for all the entrepreneurs out there.

“Patience is a key element of success.”

According to Gates, the key to a successful life is patience, because the only patient mind will be able to recognize the opportunities when they come.

“It’s fine to celebrate success, but it is more important to heed the lessons of failure.”

Failures teach as more in life than success. Success deserves to be celebrated, but you must learn from your failures too. If ignored, they might show up again. These kinds of success quotes by Bill Gates makes us realize the value of both success and failure.

He always had the eye for talent and used to persuade management to hire a candidate he favored. He believed the most important thing in business is intellectual capital. His business strategies are far ahead from the time.

“If you think your teacher is tough, wait till you get a boss.”

In all sense a funny quote by Bill Gates. Tough and dedicated teachers always create the best of adults. As a student, we might not realize that professional life is far more stringent than school life.

“Humanity’s greatest advances are not in its discoveries, but in how those discoveries are applied to reduce inequity.”

As a philanthropist, he asserts the use of technological advancements in countering the inequities around the world.

“If I were a guy who just wanted to win, I would have already moved on to another arena. If I’d had some set idea of a finish line, don’t you think I would have crossed it years ago?”

These kinds of quotes by Bill Gates tells us that he is a visionary. He always had a clear and pragmatic approach to life.

“I had a lot of dreams when I was a kid, and I think a great deal of that grew out of the fact that I had a chance to read a lot.”

“If you can’t make it good, at least make it look good.”

This quote by Bill gates was mentioned about Windows Vista. Vista was designed to appear appealing and was different from its previous counterparts. However, it failed to rise to the expectation, and Bill had to admit that it wasn’t the results they expected.

“It’s pretty amazing to go from a world where computers were unheard of and very complex to where they’re a tool of everyday life. That was the dream I wanted to make come true, and in large part, it’s unfolded as I’d expected.”

As a philanthropist, he aims to bring technology to the people who have very less knowledge about the technological advancements in IT. And he is quite satisfied with what his foundation has achieved till date.

“Television is not real life. In real life, people have to leave the coffee shop and go to jobs.”

As fascinating it may sound real life can’t be compared with the lifestyle on TV. Most of the shows today fails to portray the reality of life and regular people. The success quotes by Bill Gates forces you to define the success based on real-life experiences, not reel.

“The Internet is becoming the town square for the global village of tomorrow.”

These kinds of business quotes by Bill Gates explains how the internet has transformed the way we communicate and access information. The internet is now the central hub for knowledge, which people access across the globe.

“Technology is just a tool. In terms of getting the kids working together and motivating them, the teacher is the most important.”

“Just in terms of allocation of time resources, religion is not very efficient. There’s a lot more I could be doing on a Sunday morning.”

Inspirational quotes by Bill Gates always asserts on the importance of work over anything else, be it religion or leisure. 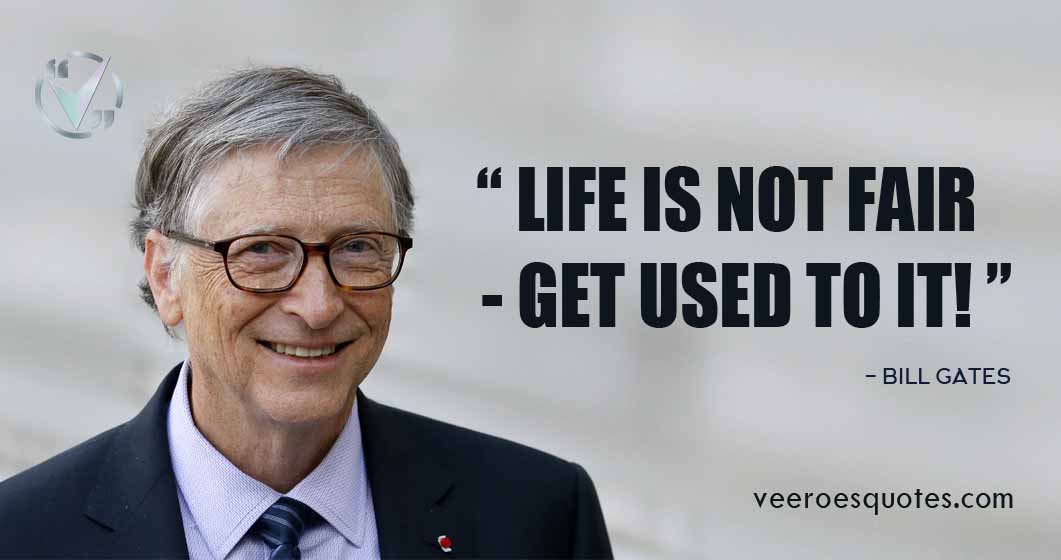 “As we look ahead into the next century, leaders will be those who empower others.”

Futurist Leadership Quotes by Bill Gates explains the real quality of a leader. Leaders must be someone who inspires others.

“Of my mental cycles, I devote maybe 10% to business thinking. Business isn’t that complicated.”

Visionary Leader Bill Gates always emphasized that business should not be the ultimate aim for entrepreneurs, and it must not define their whole life. Instead, they need to prioritize their work and personal life.

“I believe in innovation and that the way you get innovation is you fund research, and you learn the basic facts.”

One cannot expect innovations to happen on its own. The society and government need to invest more in research and building human capital who work in the field. These kinds of inspiring quotes by Bill Gates highlights the importance of research in innovation and technological development.

“Everyone needs a coach. It doesn’t matter whether you’re a basketball player, a tennis player, a gymnast or a bridge player.”

Bill Gates mother was a school teacher. Thus, he has a strong respect for teachers and the role they play in shaping a community and world at large. No matter what sports you choose or what field you choose in academics, you need someone to guide you.

“Expectations are a form of first-class truth: If people believe it, it’s true.”

Life Quotes by Bill Gates teaches us a lot about how we should perceive certain things and situations.

“I do think this next century, hopefully, will be about a more global view. Where you don’t just think, ‘Yes, my country is doing well,’ but you think about the world at large”

Philanthropist Bill Gates believes we can’t be selfish and think only about our own country. He urges global leaders that global view is essential when it comes to development.

“Who decides what’s in Windows? The customers who buy it.”

Mr. Gates always had a customer-centric approach. As per him, it’s the people who decide his products, not the staff.

“We make the future sustainable when we invest in the poor, not when we insist on their suffering.”

He has asserted many times the importance of uplifting the people less fortunate to build a sustainable future. As of where there is inequality, we can’t expect a justifiable world.

“Information flow is the lifeblood of your company because it enables you to get the most out of your people and learn from your customers.”

“How fast a company can respond in an emergency is a measure of its corporate reflexes.”

There has never been a business which had no troubles. What matters is how fast the organization reacts to the situation. Bill Gates Quotes about business and success are worth reading. 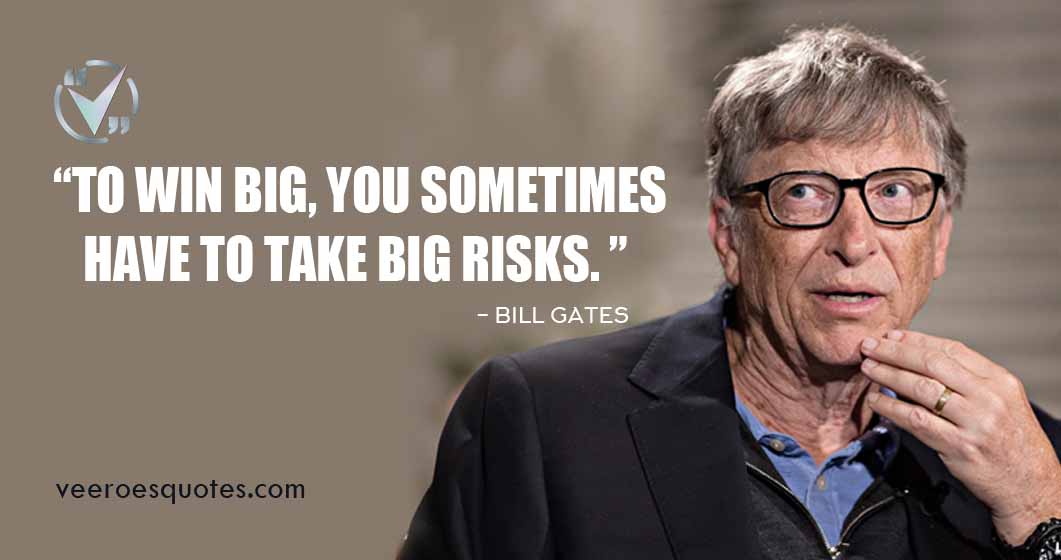 “To win big, you sometimes have to take big risks.”

Even though attacked by media and been subjected to several anti-trust suits Bill Gates never minced his words. He gave away a whopping $4.6 Billion in Microsoft shares for the Charity. Bill Gates is as generous as he is successful. It’s his philanthropic identity which gained much acknowledgment than his corporate identity of a business leader. He is a true icon when it comes to looking for inspiration from young entrepreneurs.

Success never made him arrogant or selfish, and that’s what we want to convey to our readers through the Inspirational Quotes by Bill Gates.